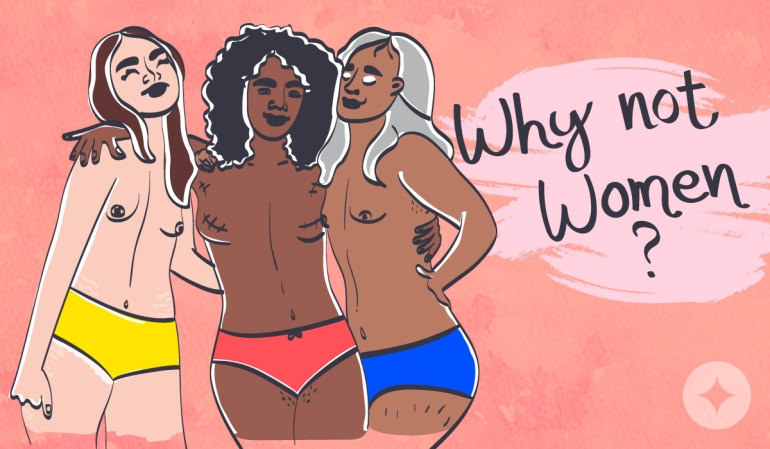 When I first saw the term “Vulva Owners” I thought to myself, “Why not women?”. I soon began to observe and learn the many different facets of the reasons behind selecting this specific term. Most times, it was to hone in on the medical care and hygienic upkeep of the apparatus. Other times, it was simply used to respect the preference of those with vulvas who don’t identify as female. Sometimes, it was used to promote the sale of items that catered to that lone anatomical region. This is where my concern first set in.

Trans women have fought long and hard for the little respect and recognition we get today. We also have so very far to go, in terms of progress. Most of us, as “passable” as we may be, still get misgendered regularly and often times, seemingly, on purpose- especially in public settings. Still, we endure and persist to remain visible, tangible and relevant in mainstream day to day society. With so many instances of assault on our civilian status; like the erasure of all gender queer verbiage in the CDC’s SOP and the Military Trans-Ban; transgender people are feeling a bombardment of rejection from a spectrum of sources- even in spaces where we once felt welcomed. Much of that rejection takes the form of exclusion from the very gender we’ve championed for, stood in solidarity with and sought acceptance as. For a disproportionate majority of the trans populace, that gender is female.

Recently I’ve been seeing many anatomy specific ads for items being marketed towards bodies featuring only certain body parts and I’ve asked myself, “why?”. I think we can all agree on the laughable and lofty efforts that have gone into venerating and reinforcing the fragile masculinity of the collective male ego: from “Man Chocolate”(which is literally the exact same chocolate) to “Cotton Swabs for Men” (because ‘Qtips’ is too feminine?); to the insane, “Man Grenade Bath Plaster” (It’s soap- Just. Soap.). Equally, there are products that feel the need to identify lighter, airier scents as “For Women” so that overtly compensatory males don’t make the mistake of buying an item that smells like flowers or….clean. Still, I’ve yet to see products that further exclude male identifying individuals by saying, “This product is for Testicle Owners,”. I have a feeling there would be a lot of one or no testes having men feeling called out, ashamed and excluded. Likely, the same way transwomen feel when we see products marketed as “For Vulva Owners.” When I first saw this advertising stratagem employed, I instantly felt a disconnection from the sex, by way of gender, that I so earnestly identify with and struggle each day to be accepted as. I’ve seen articles and blogs about Vaginal Health & Care and sexual stimulation that were titled similarly, yet I deduced that the information was pertinent to the people that possessed the corresponding equipment and thought nothing of it. The contrast of those publications from the advertisements is the utility of the product being more universal than the application of care (or stimulation) to individually owned genitalia. In short, ALL WOMEN ARE NOT VULVA OWNERS!

I’ve said, time and again, that all men don’t have penises and all women don’t have vaginas. Thankfully this is becoming more secularly understood. Imagine getting a double mastectomy, and feeling de-feminized and deformed. Still, the fact cannot be argued the womanhood is still intact. Then imagine finally mustering the strength and courage to go purchase a padded bra to feel better about the massive loss of the breast tissue that was a main source of confidence and pride. Now imagine walking up to Victoria’s Secret and seeing a sign that says: “New Line of Bras for Breast Owners!” That crippling anxiety, shame and dread are what Transwomen feel on a constant basis any time we enter any space that is marked or understood as ‘For Women’. While the sensation gets less acute over time, it never really goes away. So, try to visualize or even empathize with the crushing blow we feel when, after summoning the courage and strength to unabashedly take up space in wholly feminine arenas, we are reminded that we don’t [all] possess the supposedly required physical attributes to benefit from a universally enjoyable product. It’s like, we go through a whole journey to accept ourselves, change ourselves and then have that change be embraced to finally be acknowledged as “Woman”; only to be further declassified with the message: “Ok you’re a woman…but are you a vulva owner?” [Insert Mrs. Pac-Man Game Over sound here.]

Conversely, in the day and age of gender expression inclusivity, specificity is needed not to alienate those vulva-owners who identify as male. So, don’t mistake this as a plea to divert the usage of that term. This is, rather, an examination, and possibly a challenge, to explore the intent behind selecting it for those that have used or will use it in the future. How would those male-presenting people feel if confronted with a bathroom door that said “For Vulva Owners” and there were laws that forced them to enter that space with cis-women; publicly disclosing them in the process? They’d feel ridiculous being seen as men, in their own right, having to occupy that area solely based on their genitalia and not by their expression. The intention in using genital specific phrases must always be considered first by the user. Hopefully, the thought process would be along the lines of: “Even though this product was made to serve a specific anatomical demographic, does it have other universal applications? Must it be promoted only for people who own vulvas? Why not women?”

|Self Care
Stepping Into Your Sexual Power Zone

|Self Care
Finding Pleasure During Illness
VIEW ALL
the buzz
behind us.